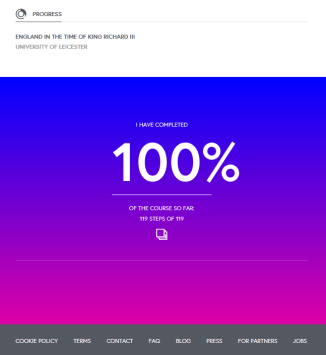 Well, it’s over.  After a 2 week break for Christmas and New Year, the final two weeks of my MOOC flew past like Wally West with diarrhea.

I was pretty sad to be finishing the course, having realised that I’d actually learned a fair amount about Richard III and society in 15th century Britain.  SPOILERS! Did you know, for example, that until relatively recently, ‘fish’ was used as a term to describe any aquatic-based animal, so as well as sturgeon, pollock, bream and the like, ducks, beavers and terrapins were also categorised as fish (and therefore, allowed to be eaten on a Friday)?  Did you know that Richard III had roundworm when he died?  Or that peasants, because they couldn’t afford to eat meat every day, actually had a healthier diet than their zealously carnivorous overlords?

So, no credits or official certificate to say I’ve ‘passed’ the course (there was no summative assessment, and formative assessment took place at the end of each week’s quiz by way of a 5-8 question multiple choice quiz), but the nice image above gives all the proof I need, and completion of a MOOC will possibly look good on my CV.  Importantly, all the things I talked about in parts 1 and 2 of this subject combined, by course’s end, to make me feel quite downhearted when I clicked the final ‘activity complete’ button – very much like when one reads a book and simultaneously wants to get to the end and devour every glorious word, but also wants to savour it, eke it out and not let it come to an end.

Interestingly, completing this course has whetted my appetite to sign up for another.  I’m not sure how wise this is: the time is fast approaching to make a start on my dissertation and I need to make a few tweaks to my CMALT ePortfolio.  Plus, despite my feelings of sadness at reaching the end of the MOOC, I also feel as if a small weight had been lifted – I now have more time to concentrate on the aforementioned ‘other stuff’.

Finally, I’ve been invited to submit a brief abstract for  JISC’s eLearning in HE Conference in Manchester in March, so have written the following and sent it off, hoping that it fits into the conference’s themes of developing knowledge through hands-on practice and the learner as a collaborator:

MOOCS (Massively Open Online Courses) have been a prominent part of the ILT zeitgeist for a few years now, and have attracted strongly opposing comments, with creators, users and commentators standing on two very different sides and stating that MOOCs are either the ‘next big thing’ in education, or a waste of time and money.

I have recently been able to experience first-hand how an engaging and successful MOOC can work incredibly well – and key to this is the community of practice formed and managed by the students themselves.

I would argue that without this self-created online presence MOOCs are likely to fail, and that providing an assessment of my own experiences will also provide food for thought to anyone who is thinking of creating, delivering or studying a MOOC.