Last week I discovered the ‘Blimage Challenge’ (BLog IMAGE) which came about when Amy Burvall challenged Steve Wheeler to create a learning-related blog post based on one of her own hand-drawn images. Since then, many images and blog posts have been exchanged via blogs and Twitter. A list #blimage bloggers and their posts can be found on Steve’s blog here.

Keen to get involved, I logged into Twitter and asked for an image of my very own from which I could write a post.  Both Steve and David Hopkins sent images, and now that I’ve dried myself off after two days in sodden Pembrokeshire without an internet connection, I’ve had time to think about both images.

I’m starting with Steve’s – a photo he took in Piccadilly Circus – as it had immediate resonance.  Here’s Steve’s photo: 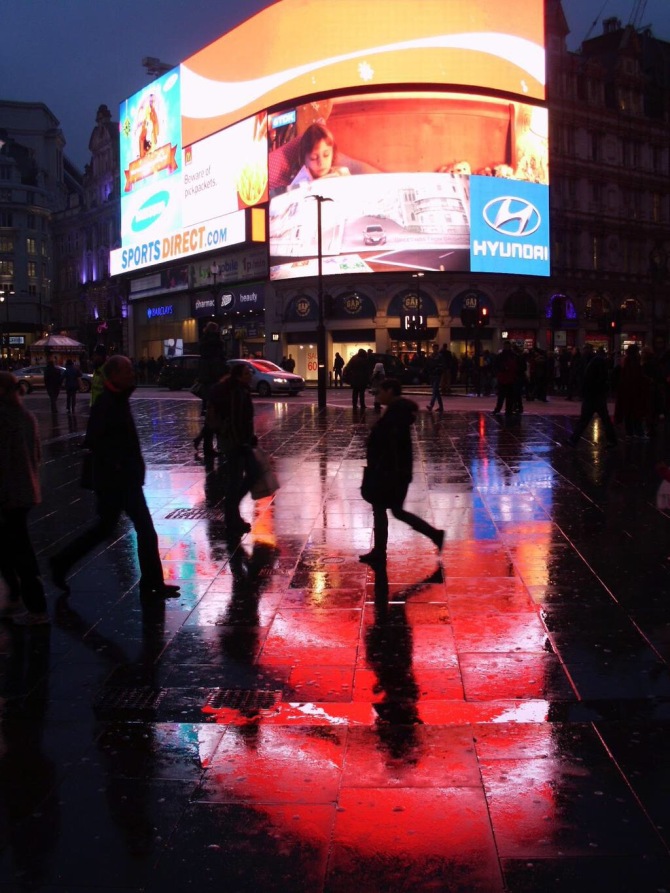 Two things struck me almost immediately: the tonal shift from those eye-watering colours running along the top of the picture and the way everything gets a lot darker in the middle. Then the fact that while that colourful upper band was screaming ‘look at this everybody! Look at the shiny shiny!’, the sodden, black figures beneath trudged onwards, faces determined to not look up, all in their own little bubble. ‘It’s been raining for God’s sake. I want to go home.’

There are still a great many people who work in education who, when offered the chance to look at the ‘shiny shiny’ – to see what technology can do to assist, interest and engage – put their metaphorical umbrellas up and their (actual) shoulders down. Teachers, administrators, managers, lecturers, head teachers, teaching assistants…some embarrassed by their lack of knowledge, some ashamed, some oddly proud (in the same way many people take pride in their inability to do maths), and – frustratingly – some just completely apathetic.

I wish I knew how to get all of these people to look up. If asked, many of them would, undoubtedly, look for a second or two, remain unimpressed, then return to the rain soaked pavement, still intent on getting home. Now and again though, a few would gaze upwards, grin and stop for a while, suddenly interested in this colourful new world. And they are the reason I love my job.

It’s all about paying it forward – so if anyone would like to have a go at writing their own #blimage post, here’s an image that you can use. It’s a photo that I took at the National Botanical Gardens of Wales a couple of weeks ago, so please feel free to share.