Unlike other enthusiasts and educators working in the learning technology sector, my blog isn’t completely ILT-centric.  I think it’s because I don’t quite see myself as the font of all wisdom when it comes to technology – just someone with a natural curiosity and enthusiasm who has landed on her feet and now does something she genuinely enjoys. I read posts of other, more established Learning Technologists out there and their knowledge blows my mind, and leaves me crawling, Luddite-like, to my armchair looking for a quill pen and a piece of parchment on which to scribe my next blog post.  As a result, today’s wittering has nothing to do with ILT – other than the fact that the images included were taken on my iPod Touch then played with using Instagram.  But, as always, I digress…

A guy who lives across the road from me has decided to do something with the huge, dead tree stump that sits in his front garden.  Has he chopped it down and used it as firewood?  Nope.  He has employed an artist with a chainsaw that Leatherface would be proud to weald to turn it ito a scultpure of King Neptune. Not only that, but he has actively invited people to take photos of the work in progess.  Importantly though, the local blacksmith has installed a collection box into the stone wall next to the tree so that people can show their appreciation by donating their spare change to charity. (Yes!  I live in a village with a local Blacksmith!  It’s like Downton Abbey with the Internet!)

This has really brightened my day.  It’s great that a rotting old treestump has been recycled and gone from eyesore to work of art.  But the really heartwarming stuff is the fact that the owner is delighted to have people take photos – and he’s not just doing this to make his garden look nicer.  He’s doing it to raise money for the local children’s hospice too.  It’s made me like the human race just a little bit more – and as we fall ever deeper into the Recession Without End (TM) these simple, beautiful gestures make me feel warm and happy inside.  And god knows, we all need a bit of warm and happy at the moment.

So here are a couple of photos: one taken on the day work began, and one taken yesterday, about a week into the project.  Apparently there’s a couple more weeks to go as the more detailed, finer work starts, so I’ll update this post with more photos as the work progresses. 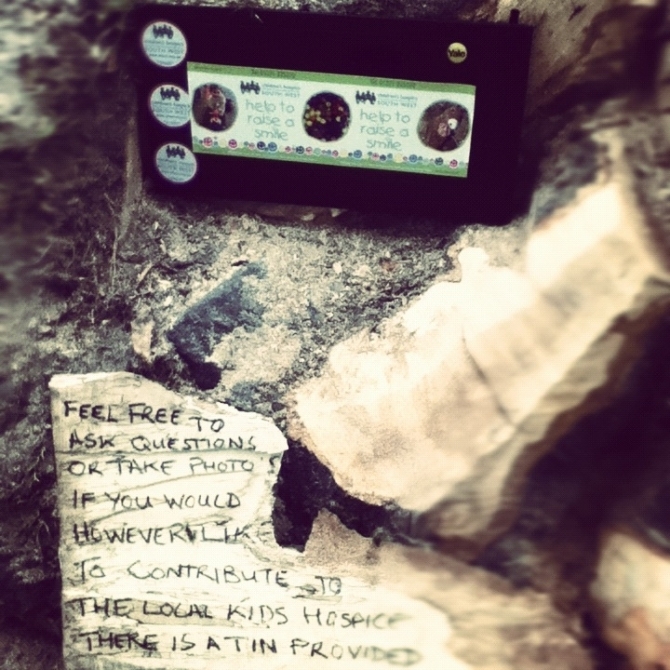