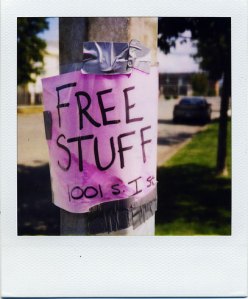 I appear to have amassed more landmarks than the National Trust. This is obviously a good thing, as it proves that I have been exploring…but my landmarks folder is getting a little messy now.
I have been dragging bits and pieces into other folders that I’ve set up to keep my inventory in order – but I just keep getting more and more “stuff”. A lot of it is given to me by other SLifers – in the past week I’ve been given a Doctor Who scarf, a set of Daleks, some TARDIS textures and – oddly – a sub-machine gun, some nuclear missiles and a tank by some avatar who thought I was a bloke (because I was rezzing a TARDIS and thought his battling Daleks were cool when we got talking).

So my subfolders have subfolders which, in turn, have subfolders and my stuff is now taking up space in what appears to be a virtual Russian Doll. Do I delete anything? No I do not – I may need it one day. And if another avatar is kind enough to offer me copies of their stuff, it’s rude to refuse.

Anyhow, the fashion show on Sunday was odd – I felt as if I was really there – found myself opening a bottle of RL zinfandel to go with the vibe. Actually started feeling nervous when I was called for my turn on the catwalk – what if I did a Naomi Campbell and fell off the stage?

Now that’s an odd thing isn’t it. I felt as if I were really there. That’s going to need some thinking about, and I don’t knows if I can contextualise what that means in writing. But I underwent the same feelings and acted in the same way as I would were I attending a real fashion show with my peers. I attended the after show party and danced for a while with two people I actually know in RL. We then went on to the Globe Theatre to watch a live dance show whe the party started to wind down, and when I went to bed in RL I felt the same residue of happiness and tiredness as I would have done had I actually gone out in RL. Very strange.

This is all becoming oddly emersive. I really didn’t think I’d become so sucked in. SL and RL are meshing into one…mmmm…bizarre…